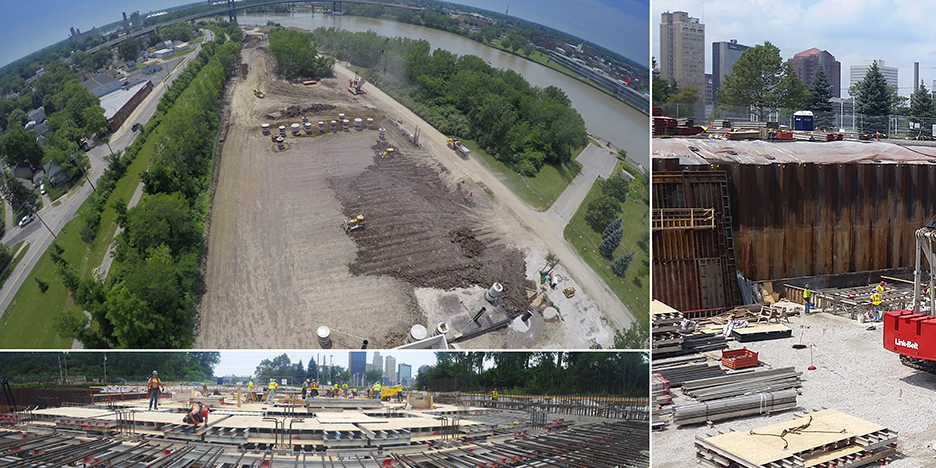 The TWI program reduced contaminants in the City’s rivers and streams and Lake Erie by constructing structures to hold, separate, or divert storm and wastewater during periods of heavy rain and funneling this water to treatment before being returned to the waterways.

Toledo-based Jones & Henry Engineers teamed with Black & Veatch Corporation for the design and construction engineering of a new combined sewage overflow facility and an underground, concrete storage basin on City of Toledo-owned property in International Park, located on the East side of the Maumee River.

Our team is proud to note this project earned the ASCE Project of the Year as well as an Honor Award from the Ohio ACEC.

The Project
The storage basin was designed to capture and store 6.90 million gallons of combined sewage to prevent combined sewer overflow into the Maumee River. The primary storage structure consists of a 5.20 million gallon, below grade, reinforced concrete structure on the International Park Site. The storage basin was fitted with a flushing system, a dewatering pump station, and appurtenant systems. The flushing system uses flushing gates to remove debris accumulated inside the storage basin. Captured combined sewage is stored in the basin and is conveyed to the East Side Interceptor via the dewatering pump station and ultimately to the Bay View Wastewater Treatment Plant for treatment.

New concrete diversion / screening structures were constructed on the existing Main Street and Nevada Street outfalls for the purpose of diverting potential overflows from the existing outfalls into the new storage basin. Screening equipment was included in the diversion structures to prevent excessive solids and floatables from being carried into the river. Flows are directed to the storage basin via an 84-inch conveyance sewer (from the Main Street Regulator) and a 108-inch conveyance sewer (from the Nevada Street Regulator). These two conveyance sewers provide the remaining 1.70 mg storage capacity for the facility.

A replacement of the undersized Nevada Street Regulator outfall pipe with a new 72-inch by 108-inch concrete box outfall pipe was constructed from the Nevada diversion structure to the Maumee River. Jones & Henry was proud to be part of this integral project to protect our region’s waterways. The structure was designed in accordance with ACI 350 concrete code. To resist groundwater and floodwater buoyancy forces, fourteen feet of soil was placed on top of the basin roof to act as a counterbalancing weight. To support the soil, the basin roof was designed as a two-way reinforced concrete slab, supported by concrete columns and walls, following the Equivalent Frame Method of design for increased economics. Approximately 19,000 yards of concrete and 2,900,000 pounds of reinforcing steel were used to construct this basin.

Since the project is located in a park that hosts social events, several restaurants, a rowing club, and volleyball courts, special attention was devoted to the ramifications of a major construction project in its midst. The City and Engineer held progress meetings with the local business owners and parks division throughout design and construction to keep them informed of the progress of the project, to listen to their concerns, and to assure clear access to their facilities throughout the construction. The City even went as far as delaying a portion of the project toward the end of the summer business season so as to not inhibit businesses and social events. Additionally, the main entrance to the Park and restaurants was reconstructed, replacing the roadway, curbs, walks, and improving the road drainage. Prior to this, storm drainage was a major concern during wet-weather events.

International Park is considered a valuable and important resource to the City of Toledo. The City’s Mater plan effort, along with political initiatives, had identified other improvements to maximize the potential of this valuable resource. International Park is expected to complement the Marina District development directly across the street from the Park to promote synergy and develop a stronger community.