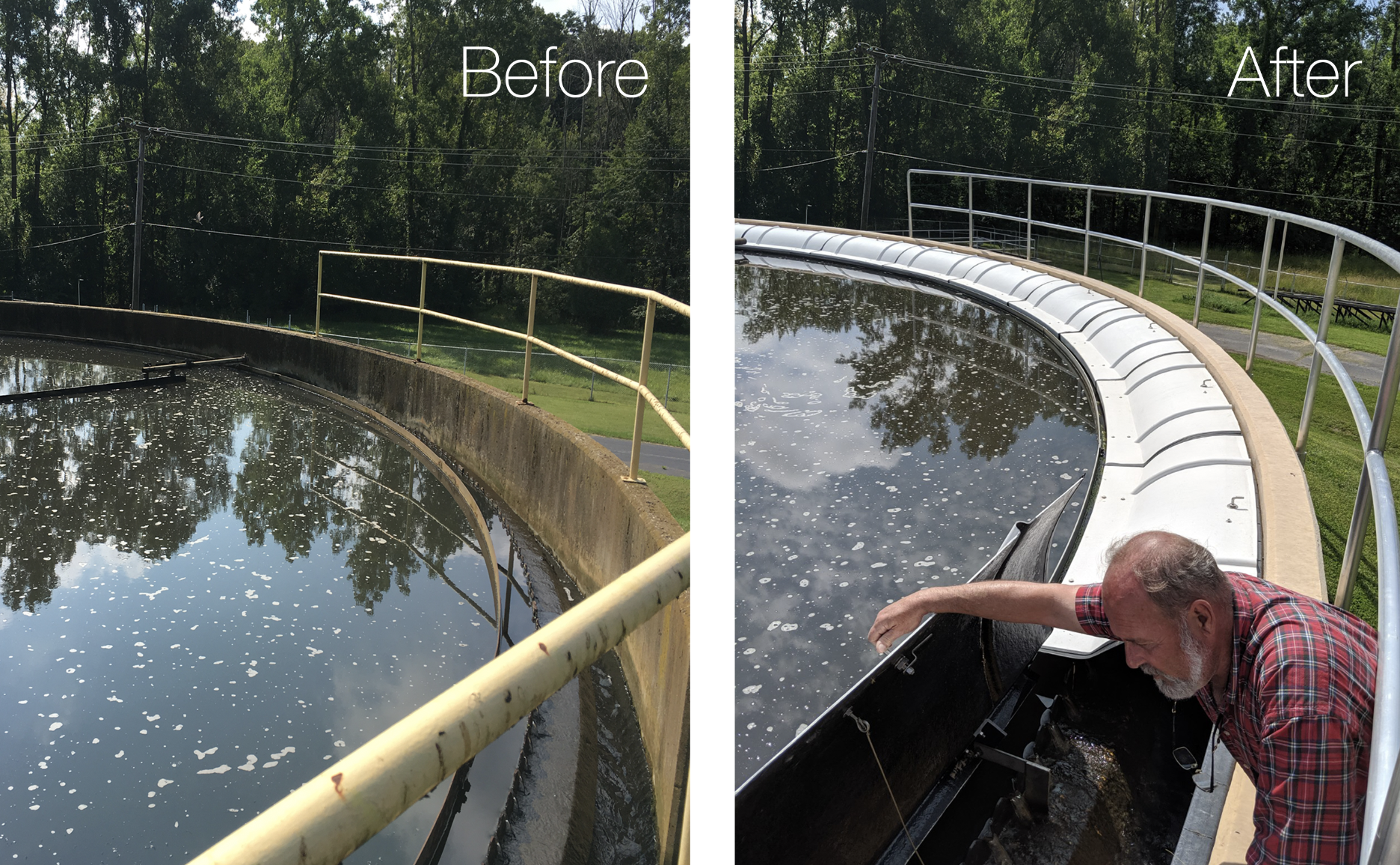 This trickling filter WWTP receives flows from Coloma, Coloma Township, Watervliet, and Watervliet Township. The treatment process consists of 2 primary clarifiers, 4 trickling filters, 2 final clarifiers, disinfection, and solids handling. In 2017, the East primary clarifier was successfully rehabilitated, prolonging the life of the clarifier and capturing a large volume of settled solids. Looking to build on the success of that project, and in following their Asset Management Plan, the PPLA WWTP set out to rehabilitate their 2 final clarifiers as well.

The final clarifiers were original to the WWTP, which was constructed in 1973. They are 60 feet in diameter with plow-style, sludge collector mechanisms. At over 45 years of age, the structures had begun to wear, and the rebuilt mechanisms were not performing optimally from the solid collection and removal standpoint. Additionally, the launders had become a maintenance concern every summer when algae/biological growth would overrun the clarifier launders.

Several components of the clarifiers were salvageable. The existing walkway beams were rusting but were inspected to be found structurally sound. The concrete tanks, while cracked and pitted, were not in significant disrepair. The electrical and control conduit wiring was intact and reusable. In general, the project focused primarily on the rehabilitation of the east and west final clarifiers. Rehabilitation included reconditioning of the concrete tanks (including injection of epoxy to strengthen cracks), repair of spalling concrete, and coating with elastomeric polyurea tank lining. The existing plow-style, sludge collector mechanisms were replaced with spiral blade-style collector mechanisms. To combat the annual summer algae/biological growth, ‘Fiberglass Reinforced Plastic’ (FRP) Launder Covers were installed. Additionally, existing steel structures were prepped and painted, and all handrail, gratings, and lighting were replaced.

Due to heavy Inflow and Infiltration (I/I) during periods of heavy rain or high river level, the plant will often maximize the permit rated flow. Average daily flow at the WWTP is approximately 0.5 mgd, but during the spring and fall, flows can push to 3 mgd. The Authority has little ability to control the I/I due to their intergovernmental agreements. The contributing communities own and operate their collection systems. The PPLA is responsible for the WWTP and interceptor sewers only. Due to these constraints, I/I control is the responsibility of the communities and is rarely a priority.

Due to the I/I flow, both the east and west treatment trains are needed to handle the flows within permit limits. As such, construction sequencing needed to be carefully coordinated. Contract documents specified that the Contractor was required to work on one clarifier at a time, and on a continuous basis, once it was removed from service. A wet fall in 2018, and a very wet spring in 2019, pushed construction to occur over two years.

During the summer of 2019, as the west final clarifier was under construction, extreme heat caused the failure of the new protective coating. The coating had to be removed and new coatings installed during the overnight hours when temperatures fell below 90 degrees Fahrenheit, the upper temperature threshold for the coating. 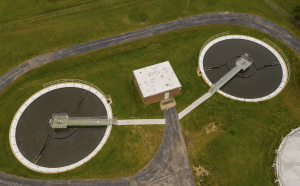 The existing East and West Final Clarifiers were rehabilitated. In general, these tanks have a 60 foot inside diameter with a sidewater depth of 10 feet.

New FRP weirs and scum baffles were included in the rehabilitation. A new stainless-steel scum beach was included to replace the existing, failed carbon steel beaches. Individual start up and substantial completion dates were issued for each clarifier.

The new clarifier mechanisms have led to a greater than 5% increase in solids capture. This lowering of total suspended solids in the effluent has made permit compliance extremely achievable. It is anticipated that the project has extended the life of the final clarifiers approximately 50 years. 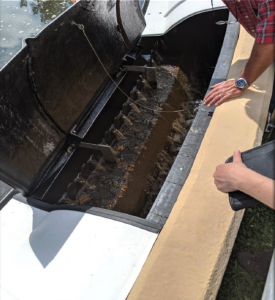 Launder overs and new concrete coatings have drastically reduced the operations and maintenance efforts by removing algal growth. The FRP Launder Cover system inhibits (direct) sunlight from reaching the elevated growth areas at the clarifier launder and weir by forming a continuous protective environment above the effluent stream. The decrease in biological growth has increased weir reliability and removed material which, in the past, contributed to the plugging of recycle pump station centrifugal pumps. The WWTP Superintendent raves about the significant effect the Launder Covers have had on operations.

In addition to the long-term cost savings of reduced maintenance time and extending the life of the equipment, the overall project was completed under budget. This project was recognized in December of 2019 as the “Project of the Year” by the Southwestern Branch of the Michigan APWA. Special thanks to our contractor partner team at L.D. Docsa Associates, Inc. 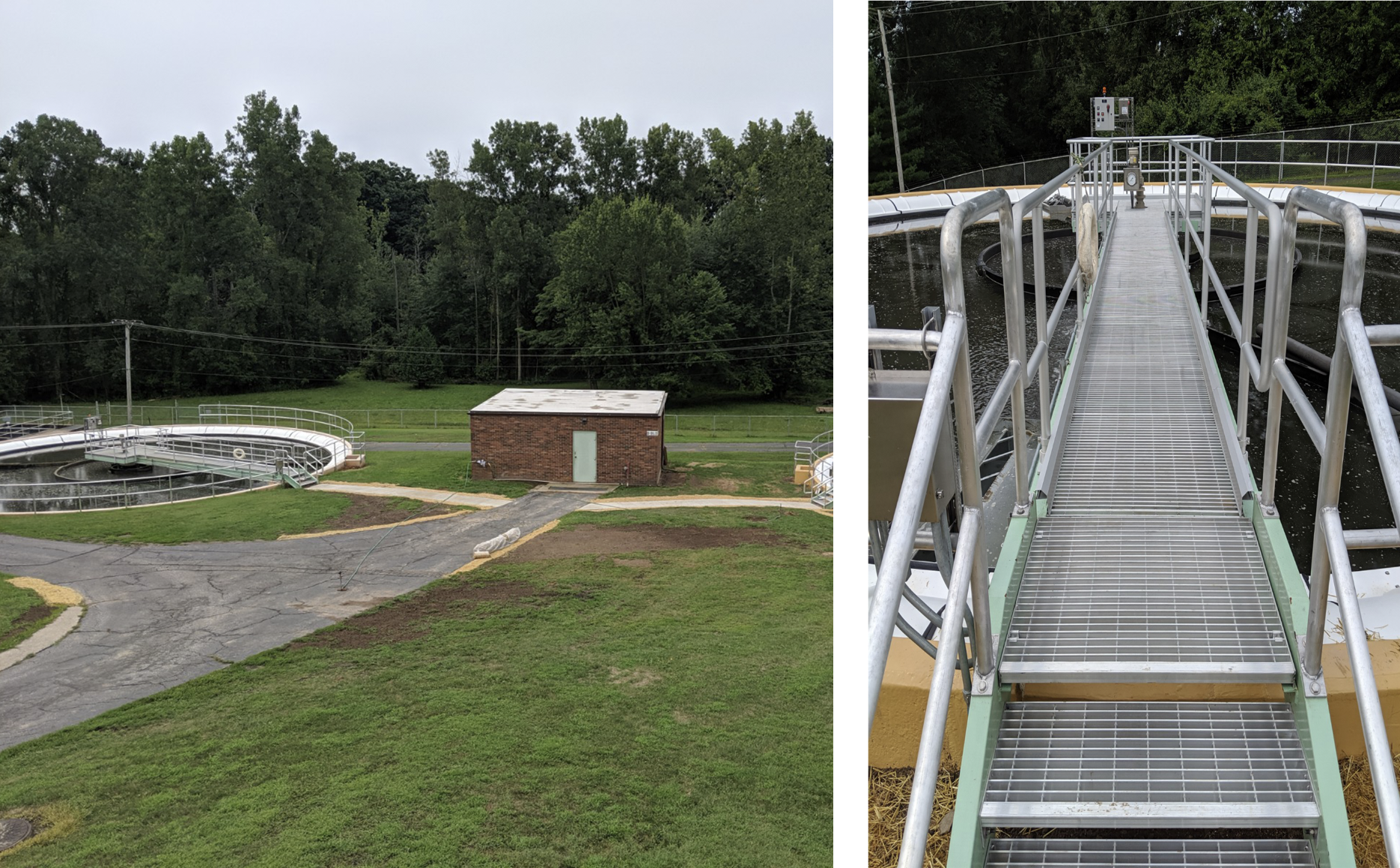