Check out how Jones & Henry partnered with the Northwestern Water & Sewer District for a green, cost-effective solution to reduce their excessive I/I.

When it rained, water would flood the sanitary sewer and pipes, overloading the treatment plant with a wastewater flow that was often two to three times more than NWWSD’s contracted amount of five million gallons per day.

In order to reduce these excessive flows, NWWSD turned to Jones & Henry Engineers for a solution.

Starting in 2012, Jones & Henry analyzed the situation, and came up with different alternatives and recommendations to solve this problem.

Preliminary engineering included flow monitoring and the development of a SWMM software model to evaluate flows in the existing SS-200 sanitary sewer collection system.  The SWMM model was used to assist in the evaluation of flow equalization basins of various sizes, as well as the performance of basin options and operational concepts in wet weather events.

By the fall of 2015, all parties had agreed upon the detailed design of a 2-million-gallon flow equalization tank, or sewage holding tank, that would hold sewage during large rain events, and then release it slowly back to the collection system and treatment plant during low-flow conditions.

Bids were sent out in December 2015 for a general contractor, and Jones & Henry reviewed and recommended award to E.S. Wagner.

For this project, Jones & Henry Project Manager and Principal Ted Bennett, P.E., decided to research and later implement a revolutionary storm water technique that had, until that time, rarely been used in the U.S.

He visited a municipality in Quebec, Canada, and decided to emulate an innovative flow regulation device being utilized there: a hydraulically-controlled flow level regulator.  This device was not only elegant in design, but automatic and easy to use.

Most importantly, it helped NWWSD to save hundreds of thousands of dollars.

What’s unique about this regulator is that the flow of water allows the device to “pinch” itself close and permit a certain flow rate through it.

To measure flows from the SS-200 collection system into the City of Oregon, Ohio (where the wastewater treatment plant is located), a Palmer Bowlus Flume was constructed over the existing 48-inch trunk sewer using a pre-packaged fiberglass metering manhole complete with level monitoring.

This flume style is specifically designed to create a hydraulic condition to measure the relationship between the level and the flow of the water.

By using this flume, the City of Oregon easily knows how much flow they are receiving.

The $5.4 million of construction work consisted of a new 2-million-gallon, partially below grade pre-stressed concrete flow equalization basin.  The basin was constructed with an open top for cost savings and nearly 1,300 feet from the nearest property for reduced aesthetic impact to nearby residences.

A center cylinder-type flushing unit was included to clean the floor of the basin following the basin emptying. This self-cleaning flushing device uses the water collected in the basin and is saved from onsite storm water runoff.  When the tank drains, the first flush of water is trapped in the tank, held, and then flushed out so it is cleaned every time it operates.

A storm water pump station with a pumping capacity of 400 gallons per minute was included to convey runoff away from the site.  This is “valved” to permit the collected storm water to be harvested and sent to the flushing device, then used for additional flushing of the basin floor.

The gravity sewer structures for this project were constructed to a depth of 35 to 40 feet below grade to connect to the 48-inch trunk sewer.

Construction started in May 2016 and completed in July 2017.  The total construction cost for the project was $5,300,000 and was funded through a Water Pollution Control Loan Fund through the Ohio EPA.

Overall, the project has proved to be significantly green in its scope and has provided a significant ROI to NWWSD.

“The complexity of the projects completed by Jones & Henry speaks to the wide range of expertise and knowledge the firm possesses in the areas of water resources. Jones & Henry has shown the ability to maintain project design and construction budgets while delivering the high quality of work we have come to expect. We have found Jones & Henry’s work products to be organized, thorough, accurate and complete with attention paid to client’s needs and specific project details and goals.” – Thomas Stalter, P.E., Manager of Engineering, Northwestern Water & Sewer District 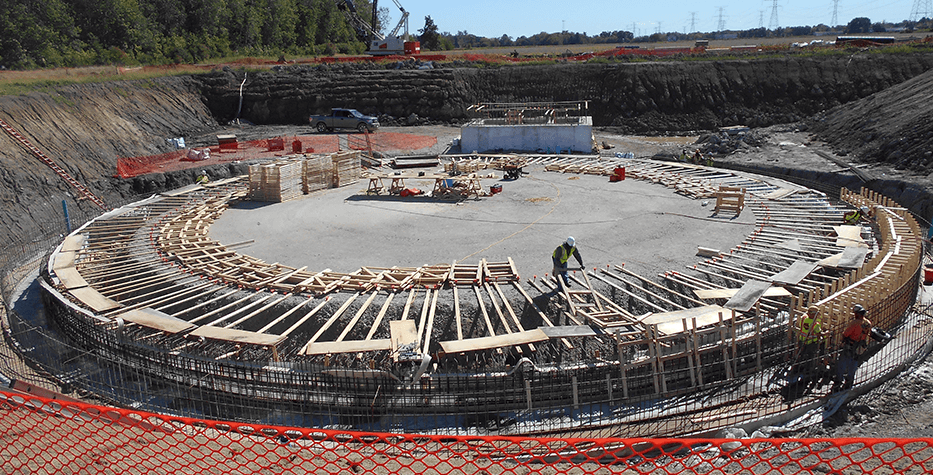