Learn more about Jones & Henry’s partnership with the City of Carmel since 1991. 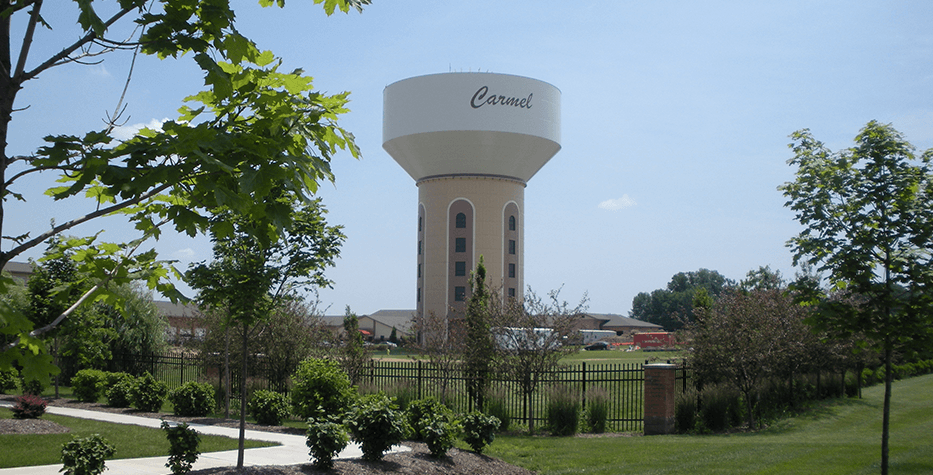 In 1989, Jones & Henry opened the doors of a new office in Indiana to serve their Indiana clients.

Since then, professionalism and service have nurtured a growing and loyal client following.

The City of Carmel teamed with Jones & Henry for the first time in 1991.  Successful updates to the City’s water and wastewater master plans became the cornerstone of the foundation for a successful and enduring relationship.  From the beginning, Jones & Henry has provided quality, capable engineering, dedication, and service to Carmel.

As the City of Carmel grew, so too did the demands on infrastructure and services.  The planning, design, and construction of improvements to the water and wastewater utilities became critical.

After all, a city cannot grow, succeed, and thrive without the lifeblood of their utilities.

Planning for the Future

The City has since built most of the improvements recommended in the master plan updates.  As the years passed, Carmel utility personnel have worked with Brian Houghton, the Jones & Henry client principal, and teams of Jones & Henry staff to provide superior utility service and value to city residents.

Hidden, But Not Forgotten

Appropriately sized and well-maintained water and wastewater infrastructure is a tremendous asset to the City of Carmel.  Jones & Henry is proud to have assisted the City in the planning and management of this infrastructure.

Protecting the environment is of paramount concern to both Jones & Henry and the City of Carmel.  Regulations intended to protect the environment are continually changing and evolving. Meeting the changing regulations with advanced technology in an economically viable way is a constant challenge.

A Creative and Innovative Team

The wastewater utility treatment process features a world-class BioPasteur system as well as a green energy solar drying system for the biosolids program.

Each year, the biosolids give-away program grows and adds valuable nutrients to Carmel’s Master Gardeners and their landscapes.

The water utility has designed a treatment plant that will turn an eyesore industrial site into a state-of-the-art water facility.  The project provides storage for the world’s most valuable commodity: water.  All of this is provided to the community by a utility with rates among the lowest in the state.

The water utility features a two-million-gallon elevated water storage tank with the option of installing multiple floors within the column for future offices. This project was designed by Jones & Henry teaming with city personnel.

As Carmel continues to expand, the City is not only a jewel of Indiana, but a unique and noteworthy part of America.  Carmel began as a bedroom community of Indianapolis and provided an escape from the chaos of the Circle City.  Since then, Carmel has evolved into a community rich in arts, culture, cuisine, and entertainment.

Carmel is a friendly, diverse community woven with Midwest values accentuated by metropolitan amenities.  Carmel has been discovered as the “right-sized” community sought by so many of its residents.

Jones & Henry is thankful and proud to be a part of the continued prosperity of the City of Carmel and the partnership that has led to the success of the City’s utilities for almost 30 years.