Read how Jones & Henry worked with the City of Waterville, Ohio, to design a new waterline connection under the Maumee River. 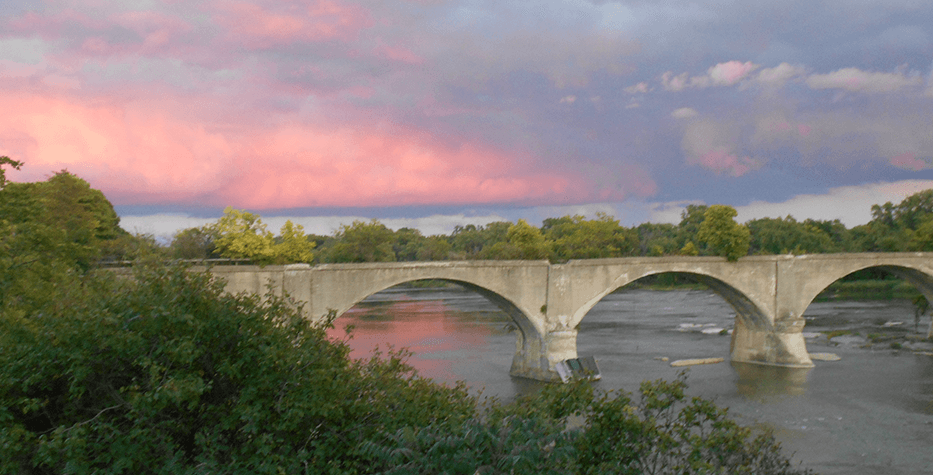 In March of 2014, the City of Waterville, Ohio, began investigating a new water source.

In June of 2015, they signed a 25-year contract with the nearby city of Bowling Green for a new source of water.

In order to access the new water source, Waterville needed to construct a new waterline connection underneath the Maumee River, which runs adjacent to the City.

Right after the contract was signed with Bowling Green and funding was put into place, Jones & Henry Engineers started the engineering design of a 16-inch water line for the City.

Jones & Henry began by completing field reconnaissance and reviewing the different challenges to cross the approximately 1,000-foot-wide river.  From the onset, this project proved to be both a unique and a challenging one for several reasons.

To begin with, there was the presence of three historic structures which would need to be protected throughout the construction process:

Another challenge was the limestone bedrock itself, which would need to be crossed with the new water line.

After reviewing construction options to determine the most viable approach to this project, Jones & Henry submitted design plans to the City, which were then approved in 2016.

Bids were solicited in May of that year, contractors were chosen, and construction ($2.5 million in total) started two months later.

The work consisted of the construction of a 16-inch nominal water main crossing the Maumee River by trenchless methods.

Jones & Henry provided design and construction representation for this project and worked in close conjunction with the contractors throughout the project duration.

All parties worked tirelessly on this project, at one point working for 35 consecutive days, 14 hours per day, seven days per week.  They had to pay careful attention especially since they were working with high-pressurized mud and needed to prevent possible leaks.

Construction finished in fall 2016.  By February 2017, the installation and required testing were completed, and on February 21, 2017, the City of Waterville officially began receiving water from their new water source.