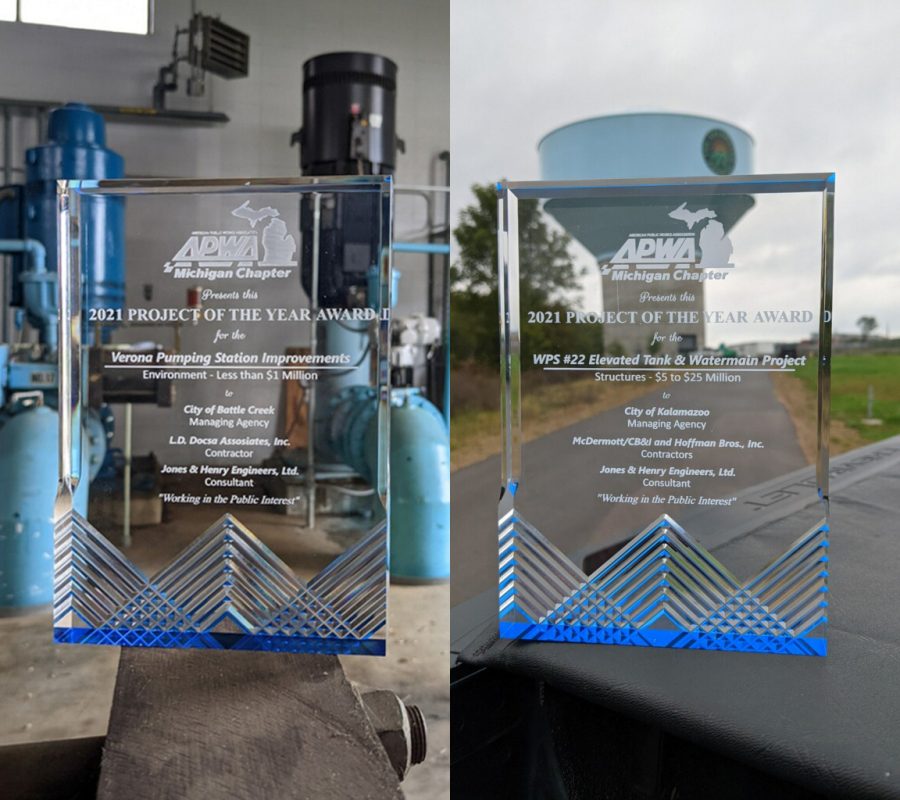 The Annual APWA Great Lakes Expo event was held at the Grand Traverse Resort in Traverse City with the awards ceremony on Wednesday, October 13th. Jones & Henry Engineers earned “2021 Project of the Year” awards in two categories for projects with the City of Battle Creek and the City of Kalamazoo.

Award categories include Environment, Historic Restoration/Preservation, Quality of Life, Structures, Transportation, and Emergency Response. Award winning projects were selected for their use of innovative techniques and technologies, overcoming significant challenges, responding to emergency needs, protecting the environment, and/or improving a community’s quality of life. 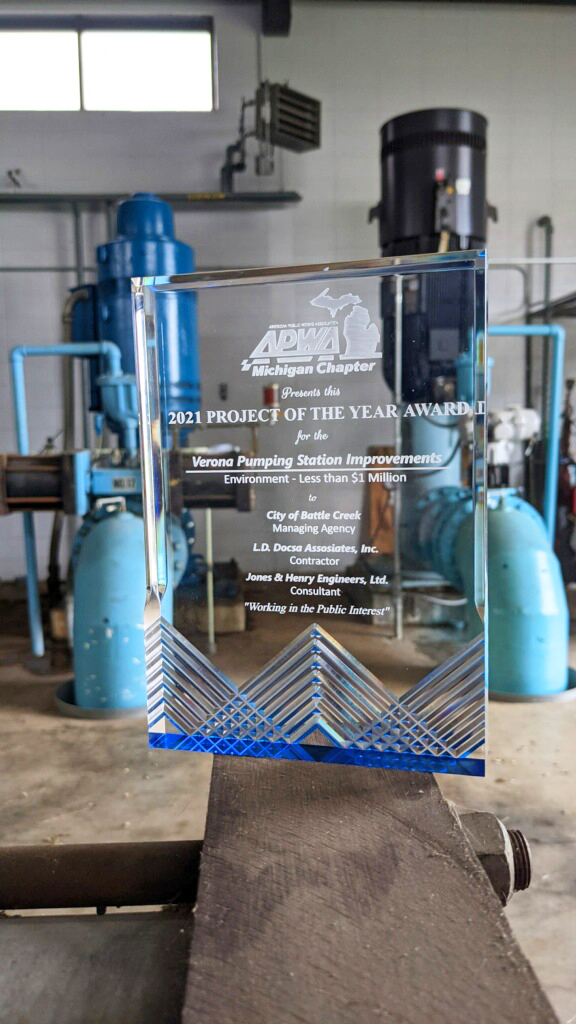 The City of Battle Creek’s Verona Pumping Station Improvements” was named “2021 Project of the Year” in the category of “Environment Less Than $1 Million.”

Jones & Henry Engineers was the design and construction engineer and L.D. Docsa Associates, Inc. was the contractor. The Verona Pumping Station is critical to the distribution of potable water from the City’s treatment plant to the distribution system.  Goals of the project included the replacement of a failed High Service Pump, and the realignment of yard piping, connecting the pump station to the City’s watermain network.  Design of the yard piping improvement greatly simplified the existing distribution piping, while adding redundancy and operational flexibility.  Jones & Henry also designed a replacement pump for the failed equipment, which utilizes a variable frequency drive to provide greater operational control and the ability to “peak-shave” electricity use leading to lower energy costs.  The project construction activities were staged to ensure that work was performed without water service interruptions. The project was a significant improvement to the City’s infrastructure, which will lead to greater system reliability and lower operating costs. 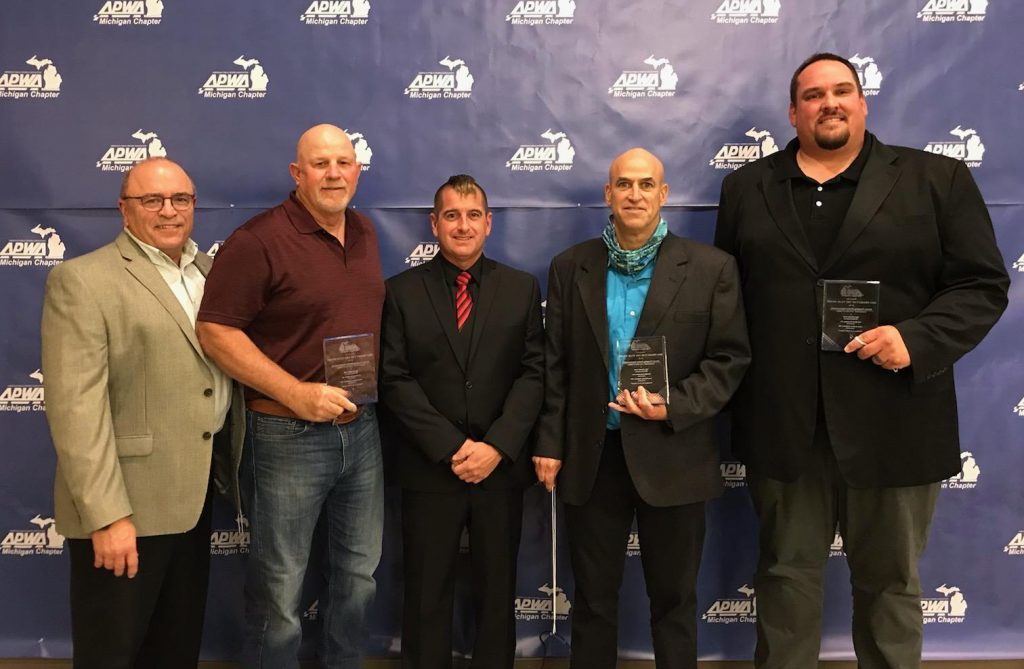 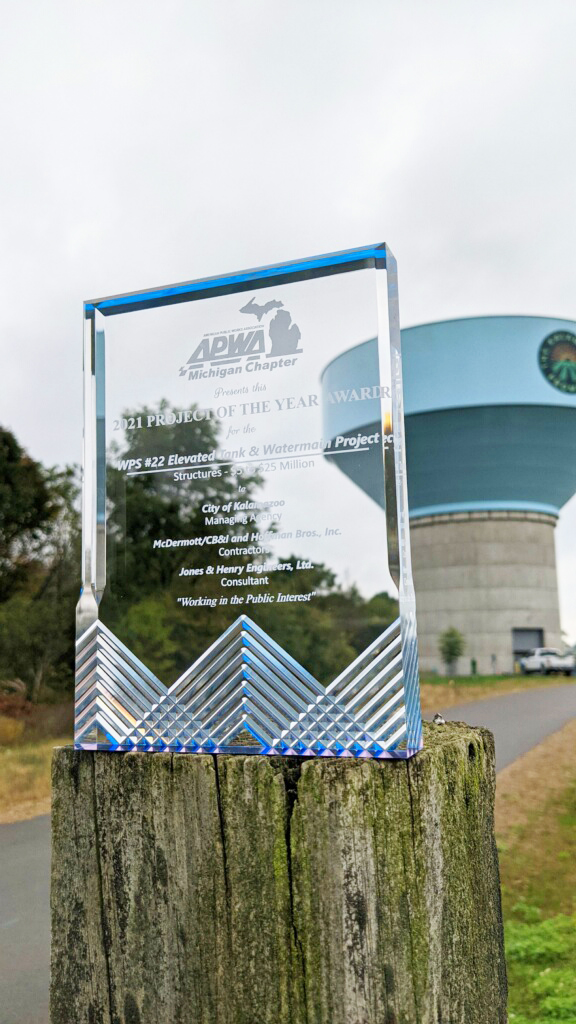 The City of Kalamazoo’s “WPS #22 Elevated Tank & Watermain Project” was named “2021 Project of the Year” in the category of “Structures $5 Million to $25 Million.”

Jones & Henry Engineers was the design and construction engineer while McDermott/CB&I and Hoffman Bros., Inc. acted as contractors for work in their area of expertise. The City’s High-Pressure District was in need of additional elevated water storage to ensure adequate emergency capacity and pressure stability, to a large section of the City. Jones & Henry Engineers worked with the City to design a 2.5 Million Gallon composite elevated water tank on City-owned property along the west side of US-131.  Significant challenges included the need for a two-mile watermain extension for the intersection of Drake and Parkview, which included crossing under US-131. The crossing had to be performed without interrupting traffic on the busy US Highway. This was achieved by installing the piping by “jack and bore” method. This complex crossing and watermain extensions allowed the City to connect the tower to two different pressure districts, improving redundancy and reliability of the system overall. Together, the project team was able to construct a storage tank and system efficiencies that will meet the water demands of the system for decades to come. With the addition of the Kalamazoo Promise logo, the tank serves as a welcome to the proud City of Kalamazoo. 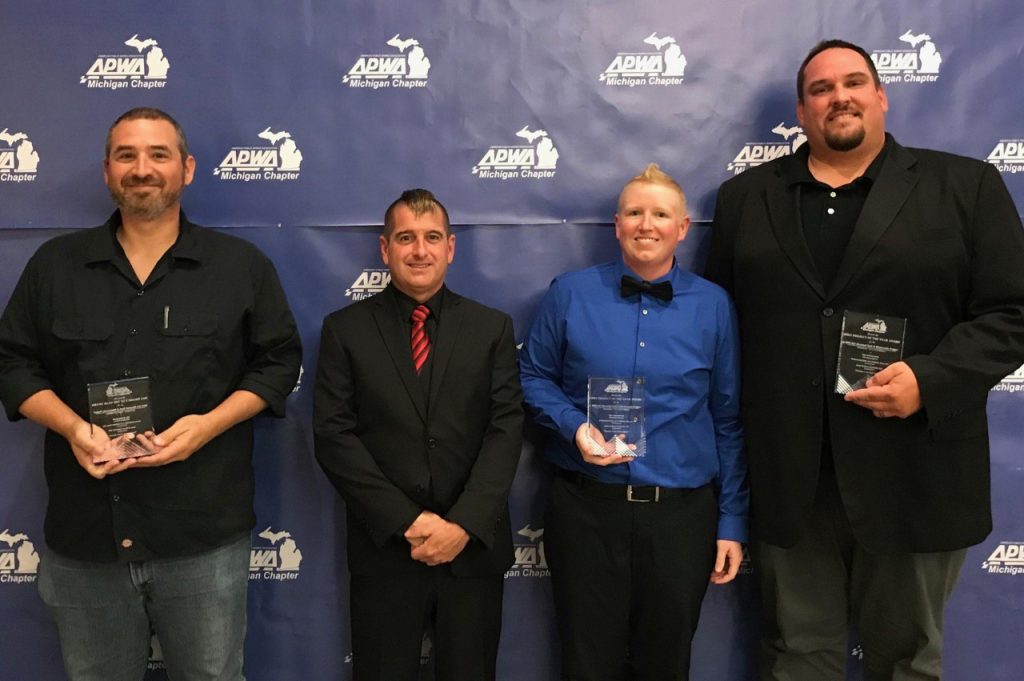 In addition to the two state-level Projects of the Year noted above, Jones & Henry Engineers also earned a Michigan APWA Branch ”Project of the Year” award for The City of Battle Creek’s “Pheasant Run Sanitary Sewer Improvements” in the category of “Environment Less than $250,000.”  Jones & Henry Engineers, Ltd. was the engineer and Balkema Excavating, Inc., was the contractor.”