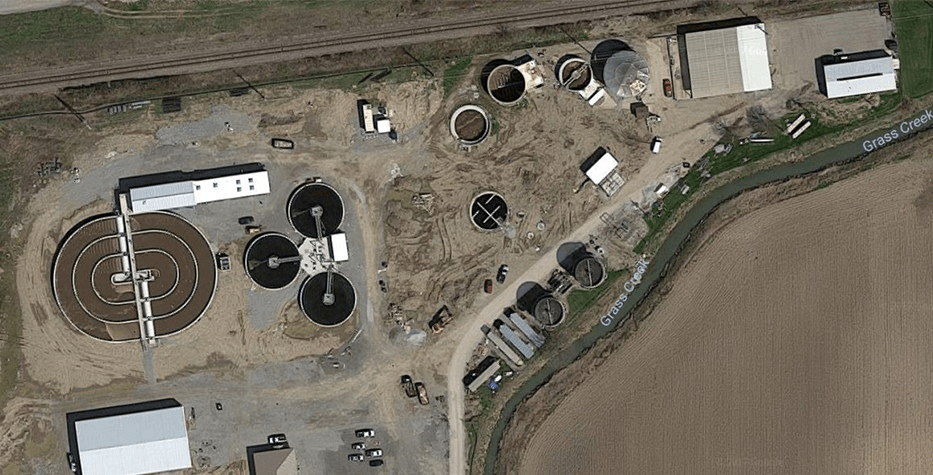 With the renewal of the National Pollutant Discharge Elimination System (NPDES) Permit in 2007, the Village of Ada, Ohio, hired Jones & Henry Engineers, Ltd. to plan modifications required to their wastewater treatment plant.

The Village of Ada

Ada is located in central Hardin County and consists of residential and commercial properties and the Ohio Northern University campus.

Though the population has been stable over the last 30 years, there are wide variations in population-based flows depending upon whether the university is in session or not.

Waste activated sludge and raw wastewater solids were co-settled in the primary settling tanks, stabilized by anaerobic digestion, and stored as a liquid before land application. Also, drying beds on site were not utilized.

With the equipment being almost 50 years old, it was becoming difficult to maintain.

The WWTP is permitted by both concentration and load on seven-day and 30-day averages. While the WWTP did an excellent job of treating the influent and achieving permitted concentrations between 2007 and 2009, it had been missing its effluent limits on ammonia with students in session.

There were 23 NPDES exceedances for ammonia concentration (15 for seven-day, eight for 30-day) and 21 for loading (15 for 7-day, six for 30-day) in this period. In addition, there were three exceedances for both Biochemical Oxygen Demand (BOD) and suspended solids. These all occurred at higher flows.

After being hired by the Village of Ada, Jones & Henry Engineers prepared a WWTP Expansion report which included a summary of the preceding years’ flows, concentrations and loadings, and predictions for future flows which accounted for a planned expansion at Ohio Northern University.

During its maximum peak, the average flow ratio for the period studied was approximately 4.6, and the average ratio was roughly 3.6.

Jones & Henry’s Expansion report proposed several treatment solutions including an addition to the existing process units, construction of a completely new treatment plant, and replacement of the liquid stream only.

Although the option of adding to the existing process units had a marginally lower capital cost than construction of a new liquid stream, the latter was chosen by the Village.

The project scope was to demolish the liquid stream and replace it with new equipment on a site adjacent to the existing WWTP which the Village purchased and to reuse selected existing process units for the solids stream. This allowed the existing treatment plant to remain fully operational while the construction of the new facility was completed.

The process design included diverting the incoming sewer to a new channel containing screening followed by grit and grease removal, an oxidation ditch, three final clarifiers and a new chlorine contact tank. Separate return and waste sludge pumping systems were used. Also, the land is available for future expansion should it be required.

Flows gravitate to a mechanical fine screen channel and to a submersible headworks pump station.  Owing to the wide range of design flows, the pump station has separate pump systems for low and high flows.

Grit is removed using a submersible pump connected to a traveling bridge which discharges into a concrete channel; an adjacent room houses grit classification equipment.

Raw wastewater flows from the grit/grease tank to a stirred tank for mixing incoming wastewater and returns activated sludge with the potential to be converted to an anoxic tank.

From this tank, flows are conveyed through a concrete channel into a three-ring Orbal for biological treatment. Selection of which Orbal ring the flows pass to is made using gates in the concrete channel.

Flows run around the outer ring and pass through a submerged orifice to the middle ring. From the inner ring, aerated wastewater passes over a weir and is piped to a clarifier splitter box. All rings have surface aerators which operate based on a dissolved oxygen feedback loop.

The depth of submergence of the aerators and thus the amount of oxygen transferred is dictated by the flow through the Orbal; higher flows result in greater submergence which increases oxygen transfer. The speed of rotation is controlled by dissolved oxygen probes.

Ferric chloride for phosphorus removal is pumped to the final clarifier splitter box. Three concrete clarifiers are installed with bridge supported mechanisms. Effluent flows over peripheral weirs to the chlorine contact tank, and settled solids pass to a partitioned return activated and waste activated sludge pump station. Sludges from two of the tanks pass to one side of the partition and the third tank to the other side. Partitions are connected by a low-level gate.

One of the existing final clarifiers was converted to a chlorine contact tank by making the tank bottom flat and installing concrete baffles to eliminate short-circuiting. Clarified effluent passes to this tank for disinfection.

The WWTP uses one-ton gaseous chlorine cylinders delivered to the site and transferred to the chlorine building using a hoist and monorail. A v-notch weir on the chlorine contact tank outlet is used for effluent flow measurement. De-chlorination using sodium bisulfite is performed in the chamber downstream of the weir and is controlled by ORP feedback.

Once stable, sludges are pumped from the digesters either to a belt filter press for thickening or to an existing tank for storage. Thickened sludges are either transferred to a repurposed drying bed using a screw conveyor or pumped back to the sludge storage tank using a progressing cavity pump.

Drainage from the drying bed and the sludge storage tank, as well as supernatant decanted from the aerobic digesters, are routed to the recycle pump station which pumps back to the headworks pump station.

The final part of the project consisted of the construction of a service building to accommodate laboratory and office space, a restroom, an electrical room for the controls and motor control center, and a garage with chemical storage for phosphorus removal.

Jones & Henry Engineers assisted the Village with the start-up of the new treatment plant. The new process equipment was tested, commissioned and operational for plant start-up on November 30, 2015.

At this time, all incoming flows were redirected to the new plant, and the old plant was shut down.

During start-up, mixed liquor was pumped from the old aeration tanks to the Orbal. No seed was hauled in. Following start-up, it took about a month to get the system stabilized with a consistent effluent quality.

Since January 2015, there has been only one monthly ammonia exceedance.

Following startup of the new plant, the contents of the remaining existing tanks were pumped to the head of the new plant.  The existing laboratory building and structures were not repurposed for the project were demolished and backfilled. Conversion of three of the clarifiers to a chlorine contact tank and two aerobic digesters began in early 2016.

All processes at the existing plant were operational by the end of April 2016.

The plant has received a peak flow rate of 8.0 million gallons per day three times since January 2015. The staff learned to operate the treatment plant in “storm mode” during rain events.

Under this mode, the returned activated sludge (RAS) is directed to the outer channel while raw wastewater is sent to the inner channel, creating a contact stabilization type process. The “storm mode” process “anchors” the RAS and prevents a wash-out of biological mass while not resulting in effluent concentration limit exceedances. The storm mode has been utilized several times since the plant was brought online.

The plant goes into storm mode depending on flow rate and duration. Operator experience has determined when the influent flow rate is 2,500 gallons per minute for greater than 20 minutes; the collection system starts to fill up.

Once the storm mode is initiated, the collection system is pumped down by the raw water pumps at the maximum flow rate of 5,556 gallons per minute.